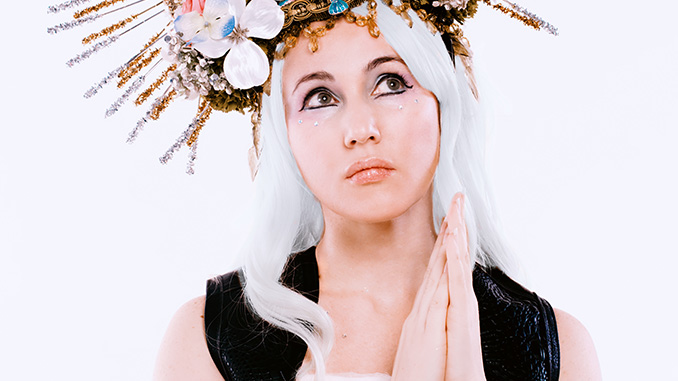 Los Angeles solo artist Jaymie Valentine, better known as ‘Cindergarden’, has a vision. Ethereal and other-worldly, inspired by things others cannot see, Cindergarden is driven to creation. This creativity however, needs real-world funding to make it a reality others can share in, and this is where crowd funding comes in. The promise of new material, back catalogue releases and exclusive merchandise are just some of the perks for pledgers Jaymie reveals, as well as a potential new tour.

As we speak your Kickstarter campaign is a quarter complete. What can fans expect if they make a pledge?
The new album manufactured in CD and Vinyl form and lots of new merchandise made available within the pledge rewards such as posters, patches, shirts and more. They can also expect to see some new music videos as a result of the support received. The Lunar Phases video seems to have touched people in a positive way and I feel I can bring them more of that with the help of this campaign. Lastly, a number of back catalogs will be able to be mastered and released finally and some of those on Vinyl as well, if the stretch goal is met.

Have you used Kickstarter before? Was it successful?
As a project creator, I have not. However, I have been involved with other projects that have used startup fundraising successfully. For example, I was the actress in the music video for a song called “Daydream from a Deathbed” by System Syn, filmed by Kelton Jones that was funded via Indiegogo. I have also made some modest pledges to other projects and became familiar with how it works on the contribution end.

What made you decide to fan-fund your next album rather than via a record label/self-funding?
There are really so many elements that go into releasing an album in a “professional” way. Music videos are also essential and a lot goes into them and I want to give my music that gift. I am compelled to honor my visions as if they’re sacred and I understand that funding is something that comes with the territory. All these things cost money – merchandise, videos, promotion. I decided to give the fan base an opportunity to show that they are out there and supporting what I am doing. I have heard from many people over the years saying some really heartfelt things and so I am having faith that they will step forward once they become aware of this project and it’s deadline.

Can you tell us anything about the forthcoming album? Is it a progression of Cindergarden’s sound or something completely different?
Well, it definitely goes to some new places. It is different and yet it also makes sense in the context of all the work I have ever done. There are elements from super early eras and in some ways it displays a “full circle” effect. Definitely some of my favorite material that I have done so far is contained within the new album. The vibe is really its own thing, as a whole body of songs it really doesn’t sound like anything else out there although as always it reflects the myriad of influences around me.

Do you plan to tour if the campaign is a success?
I do!

You also talk about making exciting artistic music videos to accompany the new tracks. What inspires you when creating visuals?
Most of my creative processes are an intuitive stream of consciousness. Concepts develop over time as details become more and more involved. They may first begin to develop when imagery strikes me through some experience and then appears as a vibrational match with the music. The imagery is powerful enough that I will feel it tells a story even if I don’t directly reveal what that story is.

Do you have any other creative projects outside of Cindergarden or does she take all your creative energy?
For the past several years I have done many other creative projects for freelance work. I designed the sound and composed music for a major Halloween Theme park attraction in southern California for 6 years. I’ve also done some composition for a few films and even some non-profit organizations such as The Humane Society and Love Machine Films. Sometimes doing freelance work drains me a little creatively but then again it gives me the opportunity to develop more proficiency at my craft or at least keep my synapses rising to new challenges.

You recorded a video of yourself talking about the campaign, but also said that you were shy doing it. How does ‘Jaymie’ compare to ‘Cindergarden’? Does your alter ego enable your more wild, creative side to shine? Or are they both one and the same?
Hmmmm, I can have a pretty reserved personality when it comes to speaking publicly. In many other ways I can come across as wild or comfortable with attention. The way I dress, for example, is definitely seen as an extroverted expression. It’s not uncommon for me to be quiet in a group setting but then you may find me on the floor doing yoga and connecting more in a vibration way rather than verbal. Cindergarden is who I really am, and who I am still becoming.

Check out Cindergarden’s Kickstarter campaign for their new album Architectures of the Wild Becoming.

The Masks of Vincent Cantillon

September 1, 2014
Thanks so much for sharing! Use discount / coupon code SHARE10 at our store for a 10% discount good towards digital subscriptions and back issues.
Send this to a friend