Life In Sodom are a band you may not be familiar with, but they’re ready to be heard. After consistently releasing new music the track ‘Souvenirs’ was included in a compilation in the late Nineties put together by goth journalist Mick Mercer. Following that the band took a break in 1999, only to return a few years later with a flurry of releases. This culminated in 2011 with arguably their most popular track ‘The Hollow and Haunted House’ which garnered praise once again from Mercer. Being a band made up of creative minds, the group took another hiatus to work on other projects but Life In Sodom have returned once more with the best of their dark-wave post-punk to offer. After making music for nearly thirty years the group are taking their most popular tracks, giving them a polish and re-releasing them for new ears to hear. Poet, performer and driving force behind the US group Gerrie Brand, takes us through his journey in a Life In Sodom.

“Any musician, whether a recording artist or not, never loses their love or passion for music. Many lose their edge or drive to create new music, but music is within all of us, both as artists and listeners.” It is this unstoppable need to express and create that keeps Gerrie and the other members of L.I.S. from packing away their synths and resigning the band to the (goth) history books. That and Gerrie also believes it is almost a duty for those who can make music to keep making music. “It truly is humankind’s greatest gift. Imagine a world without music. It would be a world without humanity.”

Over three decades and ten releases, Life In Sodom have maintained their ethos and independence, releasing everything up until now under their own Nutrix Recordings label. The highlight of their career was being recognised by prominent gothic journalist Mick Mercer and their contribution to the subculture at the time forever recorded in print. “We were humbled back in the late nineties when we were included in two of post-punk journalist Mick Mercer’s books on the Gothic subculture. With these books there were album companions, one of which was ‘The Hex Files Volume II’. It was a double CD to accompany the book by the same name. We were in the company of some iconic goth bands of the time.” The decision to include a track from the band on the CD release would prove to introduce a whole new audience to the Florida-based band. “Our track ‘Souvenirs’ became a popular cut – it is our most downloaded song too. Before our inclusion on that compilation, we’d never done much to promote ourselves, but the release of that album in Europe brought us a barrage of fan mail and opportunities to play – both in Europe and South America. We didn’t seize the moment or opportunities, however, perhaps preoccupied by other career choices we deemed more important at the time.” 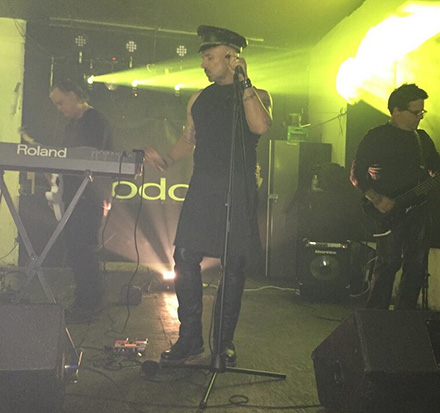 Now in 2017, Life In Sodom have returned to make a new push with some of their best tracks. “Our hope is for a new generation of fans to discover our music. The new album will contain seven songs that we picked out from previous releases. These songs are re-recorded, brand new renditions – some have been modernized and are very different from the originals. The title of the album will be Night/Day.”

“Fans can expect a digital release sometime in the late fall or early winter, with a limited number of vinyl copies to be released afterwards. All songs can be obtained through Apple iTunes, Spotify and really any major downloading outlet. Physical copies will be available from every major worldwide distributor as always. Vinyl versions will be by mail order probably through Mannequin Records in Germany.”

Their last release, ‘The Hollow and Haunted House’, was described as ‘beautifully groomed kitsch Americana’ and had a more upbeat feel than anything previously produced by the band. The forthcoming Night/Day release however, promises a return to form with Gerrie describing the tone of the album as more “introspective and conducive to the dark dance club scene”. Album release shows are planned on both the east and west coasts of the U.S., but fans in Europe will have to keep a close eye on notifications from the band for a live date nearer to their home. “A few shows in Europe will depend on the success of the upcoming re-release of our 1990 album ‘The Stains’ on Mannequin Records, whom we have signed with to exclusively release on vinyl in Europe. It will be catalog #MNQ098 and should be released soon as an EP. The CD version will also contain the video for ‘The Stains’, as well as ‘Phantasmagoria’, our second 12 inch released originally back in 1992.”

Since Life In Sodom began, nearly thirty years ago, the scene has been through some changes with trends coming back around and old school musical styles being referenced and homaged. For Gerrie, some of integrity and genuine feeling of gothic music has been lost. “The music has (changed). It seems to be less emotional and melodic, I’m not sure why, I always thought that this was what it was all about. It seems like a lot of the bands that I have been exposed to are either very repetitious and unimaginative, or so over dramatic that they border on the pretentious.” As many members find as they progress through the subculture and reflect on what it means to be a part of it, Life In Sodom love the ethos of goth more than the outward show more and more. “(It is) the fashion, art, and music, and for the most part the thoughtful, well meaning, ‘questioning everything that’s not right on our Earth’ people involved in the scene that have become my favourite part of it.”

Keep up to date with everything Life in Sodom and find them on facebook. View their new music video ‘The Lonely March’ below.

The Unearthly Sound of Bestial Mouths

March 19, 2015
Thanks so much for sharing! Use discount / coupon code SHARE10 at our store for a 10% discount good towards digital subscriptions and back issues.
Send this to a friend