We encounter exquisite artwork and beautifully sultry scenes with themes of underlying disorder caused by human monsters and occult magic. In this world the modern and the ancient, magic and technology, innocence and corruption swirl around with an intoxicating effect.

In Jason Beckwith’s comic series Marnie, a naive girl who previously worked in her local Frosty Cream, moves to the big city to join her cousin Jasmine, a Gothic DJ. She is dragged into a whirlwind of adventure where she discovers shadowy and hidden secrets, exploring a previously unknown side of her personality. Sky a dangerous yet charming club owner supplies his venues with a drug called Eden, by distilling the virtue of innocence using an occult process. The story is a multi-layered text exploring themes of naivete, the uncanny, magic and corruption all within a night time city landscape, reminiscent of Gotham.

Taking Eden is a very different from more standard superhero comics with binary good vs. evil character arcs. It is a subtle and complicated text with deeper focus on character interaction. Beckwith tells us that: “Taking Eden is a niche book in a niche market. I knew from the start that it would not have mass appeal. I’m not expecting this to get me rich. I just want to make enough to make the next book. I believe that there is an audience out there for it, but I don’t believe it will ever be Marvel, or DC huge. For that reason, I pull no punches with the story telling. It’s quite liberating to tell the story the way that I want to, without worrying if I’m going to offend.” Taking Eden is for the more discerning reader and has an appeal beyond the standard comic. Subtle changes in mood and a rich dialogue provides a more emotional response towards the characters. 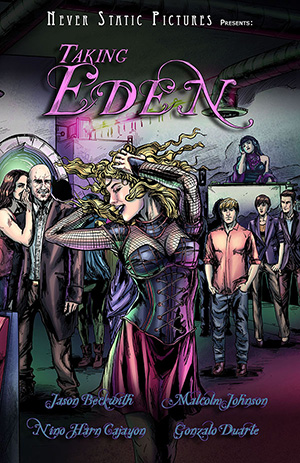 The project started as a creative exercise with Beckwith’s co-worker Malcolm Johnson when they were working at an advertising agency in Silicon Valley. They pinged emails back and forth writing the story lines, sometimes stopping mid-sentence. Realizing that they had fantastic material the comic series was born. Beckwith is now writing solo. He uses note cards to write the scenes and putting them on a large bulletin board, hand drawing layouts for each page and filling in the dialogues.

The most striking aspect of Taken Eden is the coloring, costumes and dark setting of the comic. Niño Harn Cajayon’s beautiful pencil and ink drawings capture the complex range of character emotions and action scenes, giving the comic a slightly sketchy feel reminiscent of a Victorian “Penny Dreadful”. Working from Beckwith’s hand sketches they collaborate to deliver the scenery and characters’ aesthetic. Gonzalo Duarte the colorist creates a subtle pallet of shadowy hues, giving the work a smoldering tension. He has captured the gothic pallet without overloading the pictures with black, which is always the biggest challenge in gothic artwork. Beckwith then performs further shading and shadowing which “provides more detail, and darkens the scenes to fit the mood”. Beckwith gives his artists lots of freedom and in this respect it is very much a work of collaboration.

As we all love fashion the varied wardrobes of Marnie and Jasmine and ragged aristocratic look of David offers a vast plethora of inspiration for budding Cosplayers. Beckwith loves the Cosplaying community and sees much potential scope for his characters in this arena. “At this point, my comics have not been inspiration enough for Cosplayers to try my characters. I think one of the things that Cosplayers love, is to be recognized as a specific character by their peers. At this point, Cosplaying as one of my characters would involve a lot of telling others what they were dressed as. Hopefully that will change in the future, as Taking Eden gains exposure. I would LOVE to see someone cosplaying one of my characters!” Inspired by Cajayon’s beautiful illustrations there is certainly much material to get the creative juices flowing. 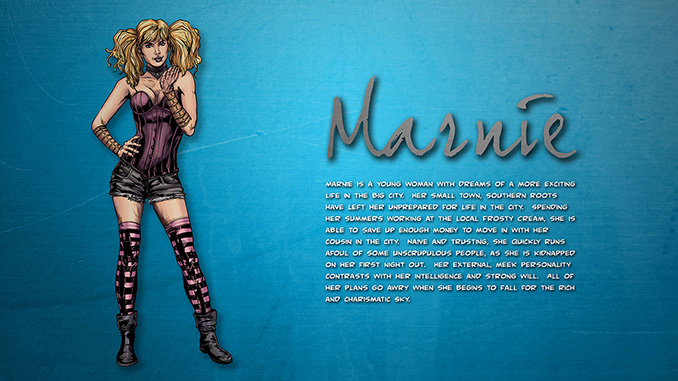 Flicking through the pages of Taking Eden the reader encounters nods to many different horror tropes, such as slenderman, zombies and even a tentacle monster. Beckwith tells us: “While classic horror tropes are referenced in the story, the monsters in Taking Eden are all human. I love villains that follow a course, because they think it’s the right one. No one wants to be the bad guy. Most strive to do what’s right, but get blinded by material greed or desires of the flesh. I try very hard to provide back-story and reasons for the actions of the characters. The overall theme should be one of growth, and self-discovery as Marnie comes to terms with a bigger world than the small town, sheltered life that she grew up with.” The monsters of Taking Eden are the ones we find within, and characterization is central to bringing these themes out in the comic.

Another huge theme running through Taken Eden is the occult magic used to produce the drug and how this ancient power flows through a modern club scene. Beckwith has a fascinating take upon this mixture of magic and modernity: “Well, what is magic? What differentiates magic from technology? Have you ever watched fire consume a log? Have you ever played with two magnets? Have you ever floated in a body of water? These things are magic to me, despite clear scientific explanation. We can get information beamed to our hands from satellites in space. From a practical standpoint, there is no difference between magic and technology.” Taking Eden captures this very modern dilemma of amalgamating ancient spirituality with seemingly modern magic.

Finally, we posed Beckwith the difficult question of which character was his favorite. He tells us: “I don’t have a favorite. I spend the most time on Marnie, as she’s the protagonist.” “I love spending time with all of my characters, and ensuring that they each have a compelling individual story arc.” Perhaps this is what makes Taking Eden such an appealing and unique comic series; the detailed characterization. It is a profound and shadowy comic book engaging with so many different themes in intricate and thought-provoking ways.

The Extreme Nature of Bats: A Passmore Studios Documentary

The Little Black Dress Past and Present

August 22, 2014
Thanks so much for sharing! Use discount / coupon code SHARE10 at our store for a 10% discount good towards digital subscriptions and back issues.
Send this to a friend