The Extreme Nature of Bats takes us on a fascinating journey around the globe exploring the nature of bats as it disproves popular legends which have threatened their existence. Filmmaker Greg Passmore has been exploring caves since he was a kid. He was fascinated by what he found there: transparent and blind creatures, archeological remains, underground rivers, naturally bats. He grew accustomed to these creatures, “I spent so much time exploring caves that bats became my often present companions. They are fascinating creatures, with complex social structures, massive underground cities and the freedom of flight to cruise at remarkable speeds in winding cave passages.” When the opportunity came up to produce a documentary about bats, Greg didn’t have to think twice, “Bats are also surrounded by myth, mystery and conflicting tales. Everything needed to make a fascinating story.”

Actual production of The Extreme Nature of Bats was no easy task. Greg tells us, “Filming bats can be difficult. We need to protect them and us. Most of our trips had mammalian biologists present specialized in bats. In Mexico, the government assisted us in the filming of the reclusive vampires. We wear protective clothing to avoid cross-contaminating caves with fungus or other pathogens. We also use air filtration systems to avoid histoplasmosis and cryptic bat rabies. We did some of the filming in Frio Bat Cave, a location know to contain rabies in the air. As such, our crew received the full rabies vaccine in advance, along with about a dozen other vaccines. We entered the caves about the time of flight to minimize sleep interruption and we kept low and quiet. Despite this, we were in their space.” 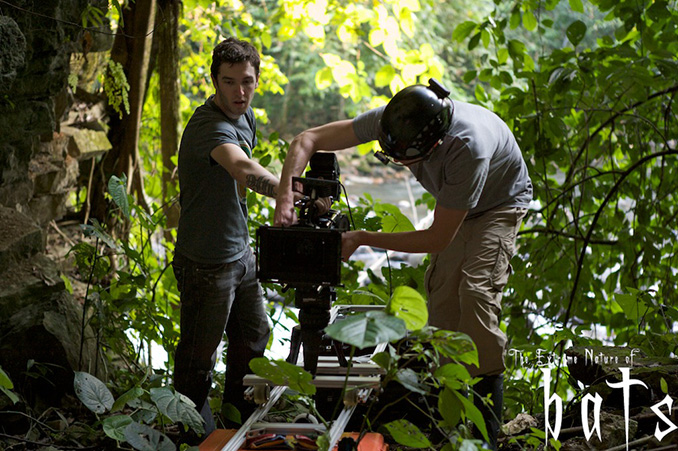 Western civilization has generally regarded bats with superstition, fear and uncertainty. To understand the basis for these misconceptions The Extreme Nature of Bats opens with a look into the historical fictional background of these fascinating creatures. Bats have been tied to the legend of vampires since the 1897 debut of Bram Stoker’s gothic novel Dracula, in which the nefarious Count morphs into a bat during his nocturnal doings. Bats have been seen ever after as evil and devilish creature, bent on sucking their victims dry of blood, but the truth is much, much more complicated.

Filming bats can be difficult. We need to protect them and us. Most of our trips had mammalian biologists present specialized in bats. In Mexico, the government assisted us in the filming of the reclusive vampires.

These creatures do indeed share some traits with Stoker’s fictional Count Dracula. The Extreme Nature of Bats takes us to the Latin American habitat of the vampire bat, the only mammal which subsists solely on the blood of other animals. We see these bats using all four limbs to crawl stealthily along cave walls, eerily reminiscent of the scenes of Dracula scaling his own castle walls in Francis Ford Copola’s 1992 cinematic take on the novel. We learn that vampire bats also return night after night to the same animal, much like Stoker’s Dracula slowly drains Lucy. However, the main dangers to the prey of vampire bats come from their transmission of bacteria and blood borne viruses rather than blood loss. The intimidating Latin American vampire bats are reclusive and very hard to film. To get a single shot of a vampire bat feeding on a chicken, both the crew and the bat waited for hours for the chicken to fall asleep before the bat finally fed on it’s blood. As beautiful and fascinating as these three species of vampire bats are, within their limited tropical range they are seen as a destructive force. Although they rarely prey on humans, their eating habits kill thousands of cattle and chickens each year in Mexico between the transmission of rabies and repetitive blood letting. This puts other local insect and fruit eating species in danger as humans attempt to control the numbers of vampire bats. 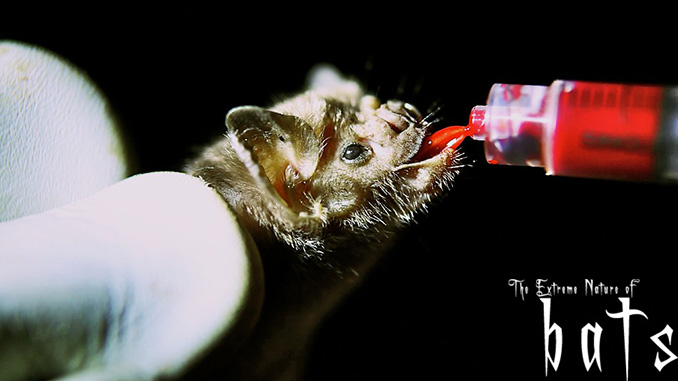 The Extreme Nature of Bats also takes us to Seychelles off the coast of Africa where giant fruit bats make their home. Fruit eating bats have specially evolved mouths allowing them to break through tough fruit rind and feast on the nectar and fruit flesh. They play an essential role here in the forest, helping to seed and distribute fruit trees which provide shelter and nutrition for a variety of other species. Unfortunately the bats of Seychelles face several threats to their existence: deforestation and loss of habitat as well as hunting because the locals eat them. Because of their vital role in their environment, fewer fruit trees to feed on leads to an even smaller population of bats to propagate the trees. Greg Passmore describes the mega-bats as super cute, curious and intense with squirrel-like behavior. 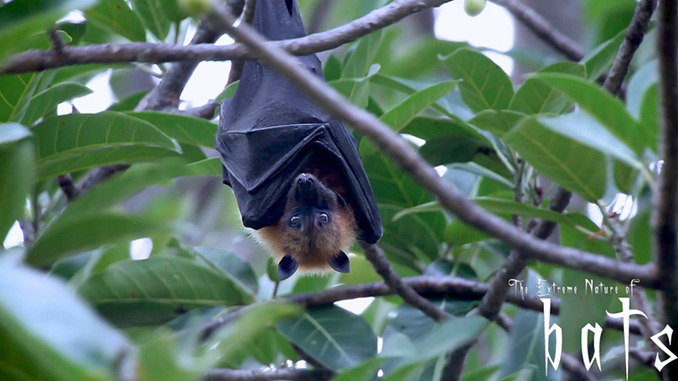 The film moves back to Texas to show the famous Bracken Cave mega-colony of where over twenty million Mexican Free-Tailed bats make their home. The nightly exit from the cave is awe-inspiring even for a seasoned cave explorer like Greg: “Although I have been around bats my entire life, having millions of them overhead taking flight for the evening is deafening and intimidating.” These bats are extremely beneficial insect-eaters, consuming up an average of 200 tons of bugs every evening.

Bats are complicated creatures, with each species evolved to perform tasks essential to their environments. The Extreme Nature of Bats provides a fascinating look at bat biology and behavior, dispelling misconceptions, encouraging acceptance of these creatures as a natural part of the environment and appreciation for the important role they play in contributing to a well balanced ecosystem.

View a 22 minute screener of never-before-seen footage of some of the largest bat caves in the world from Transylvania to an island off the coast of Africa and the deep jungles of Mexico; capturing megabats, the infamous vampire bat, and the beneficial insectivores in underground Texas.

Zombies, Move Aside: The Witches Have Arrived

September 26, 2016
Thanks so much for sharing! Use discount / coupon code SHARE10 at our store for a 10% discount good towards digital subscriptions and back issues.
Send this to a friend