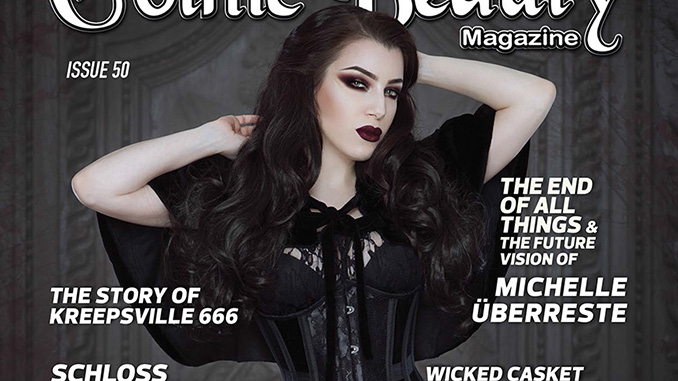 We’re excited to announce the release of Issue 50!  Here are a few features in this issue you won’t want to miss…

Veronica Varlow
Veronica Varlow has had a variety of titles attached to her name throughout the years—burlesque performer, one of Emilie Autumn’s Bloody Crumpets, or perhaps you even remember her as a mentor back on the MTV show MADE. Suffice it to say, Veronica Varlow is a woman of many talents.

Danny van Ryswyk
Van Ryswyk is a Dutch digital painter and sculptor that credits a childhood extra-terrestrial experience as having a large influence on his artwork. Hearing that an artist was influenced by a UFO citing, a person might be lead to assume that his work includes images of large-headed aliens or other tropes we’ve come to know through popular sci-fi movies. The way in which the experience affected him, however, is not so simple.

Michelle Überreste
It is a rare treasure to find a designer who can create looks that merge past classic sentiments with futuristic designs and materials. It’s even rarer to find a gem that is appropriate for both day and night wear, if one is required to dress for both spheres. However, Michelle Überreste’s designs bring both ends of history together into a present piece that echoes of the future to come.

Kreepsville 666
Every brand begins with a story. When you look at Kreepsville 666, a brand whose products are emblazoned with the likes of horror icons Vampira and Elvira and adorned with blood and gore, where would you imagine their story began?

3TEETH
Frontman Alexis and his band look like a Mad Max gang drawn by Frank Miller – post-apocalyptic in black and white with slashes of red. Their previous releases combined aggressive political lyrics with pounding industrial beats, angry and powerful but catchy and danceable.

Subscribe or order this issue direct from our store.

January 27, 2017
Thanks so much for sharing! Use discount / coupon code SHARE10 at our store for a 10% discount good towards digital subscriptions and back issues.
Send this to a friend