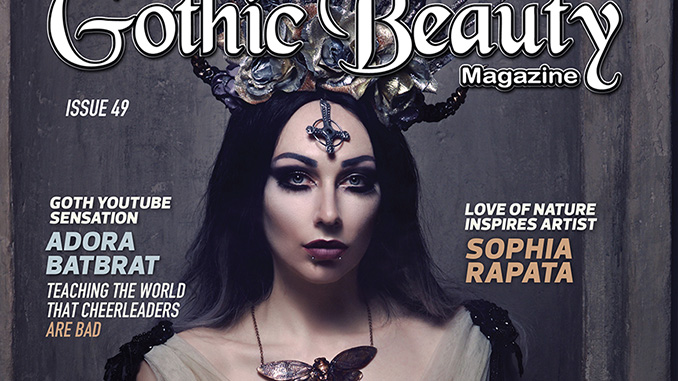 We’re excited to announce the release of Issue 49!  Here are a few features in this issue you won’t want to miss…

Sophi Reaptress
Even before beginning her fashion career, Sophi Reaptress had a way of attracting major attention when it came to her clothing. She was raised in Caracas, Venezuela; an area where the alternative fashion scene was small and dressing goth still had the power to strike fear into the hearts of strangers.

Adora Batbrat
Adora Batbrat is a gothic princess with attitude. A hugely positive attitude. She also has a YouTube channel with over 93,000 subscribers and more than four times that number of fans on Facebook.

Artist Sophia Rapata
Multi-talented artist, musician, and doll-maker Sophia Rapata has created a whimsically dark world for anyone who will only sit up and take note. Her eccentric creations are both inviting and provocative, certain to appeal to those with a heart bathed in both light and dark hues.

Urban Exploring
All the world over, there are abandoned places with untold stories. Toys are left behind, faded paintings adorn flaked, peeling walls. There is the overwhelming sensation of eerie stillness, a silence as thick as the stale air. These places, seemingly untouched for ages, are the focal point for a unique group of people known as urban explorers, or place-hackers, who venture into abandoned spaces in search of the unknown.

Ayria
Ayria is an industrial EBM artist, who has toured with The Cruxshadows, Project Pitchfork, and even played with VNV Nation. By no means should she be underestimated, or written off as ‘just a girl’.

Subscribe or order this issue direct from our store.

The Unearthly Sound of Bestial Mouths

June 2, 2017
Thanks so much for sharing! Use discount / coupon code SHARE10 at our store for a 10% discount good towards digital subscriptions and back issues.
Send this to a friend