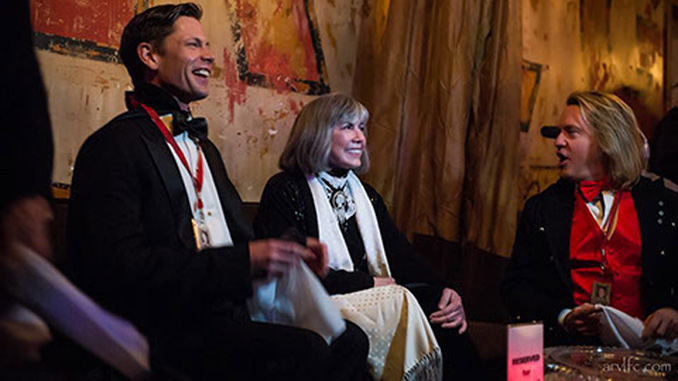 What are your plans for Halloween weekend? Maybe you’ll binge watch horror movies on Netflix while eating handfuls of fun-sized candies. Or maybe you’ll join the throngs of partygoers and spend a night clutching a red Solo cup amidst a sea of store-bought Halloween costumes. Or maybe you’ll get more creative and round up some friends to tell scary stories by a bonfire. But what if I told you there was another option? One that involves hobnobbing with the vampire elite—a place where you’ll find Steampunks and Neo-Victorians alike sipping cocktails while dark rock music pumps throughout a grand hall. Which option would you choose?

For those of you who will be in the New Orleans area on October 28th, the latter option is well within your reach. The official Anne Rice Vampire Lestat Fan Club (ARVLFC) will be hosting their annual Vampire Ball and it is a dark and romantic event surely not to be missed. Held in the Republic club located in the heart of New Orleans, this will be the club’s 28th Vampire Ball to date.

The ARVLFC has been in existence for 28 years. Headed by president, Sue Quiroz, the club’s focus is just as the name implies—the works of esteemed gothic author, Anne Rice. The members are like a family, and each year they come together at the ball to celebrate Anne’s work. And by “celebrate” I don’t mean they meet up and hold quiet book discussions. It’s actually quite the opposite. The vampire ball is altogether a dance party, a costume ball, a reenactment space, as well as an ode to Anne Rice herself, with an atmosphere that Quiroz describes as “electric.”

This year’s event is titled “Midnight in the Savage Garden of Blood and Evil.” The event’s title usually is a reference to Rice’s most recently published work and it serves not just as a name, but as a framework for the entertainment at the event itself. For example, a band might perform music related to the work or the event might be hosted by a literary character, or they might even show clips from related films such as Interview with a Vampire. Since Rice doesn’t have a new book coming out this October, this year’s ball was not named after one of her works; however, Quiroz and Rice worked together and managed to come up with a name still befitting the event.

It’s worth noting that Anne Rice doesn’t simply serve as inspiration or a consultant for these events—each year the author finds a way to join in on the fun herself. Rice has attended almost all of the vampire balls, with the few exceptions being when she is on tour or has other commitments. And while this year’s event is being held at the Republic, previous balls have been held in a variety of other spaces which have included one of Rice’s own houses and the St. Elizabeth’s Orphanage that Rice has used for family and charity events. From the inception of ARVLFC to the present, Rice’s involvement remains strong. And during those aforementioned times when Rice is unable to make it to the ball, the fan club always takes care to invite other prominent vampire writers such Charlaine Harris, author of The Sookie Stackhouse novels.

It’s important to point out that the event is not just about celebrating literature, but it’s also about celebrating the beauty and pageantry that surrounds the world of vampires. In order to fit in with the ball’s dark theme, attending guests are encouraged to dress up. And while you will certainly see a fair share of undead creatures and literary characters roaming around, such as Lestat and Louis, there is no strict vampiric dress code in place. Guests are simply asked to opt for something beyond jeans or casual clothing. According to Quiroz there are a lot of Victorian dresses, corsets with full skirts, Steampunk pieces, and 18th century outfits seen in the crowd. Also, many of the men opt for Victorian suits, hats, gloves, and even canes.  “Usually everyone works on their outfits for a year,” Quiroz explains. “You won’t see any packaged costumes here!”

As for the entertainment, this year guests will be treated to performances by three different rock bands—Skinz N Bonez, Pandora Black, and Varna. “It’s going to be exciting when the local group Skinz N Bones marches in drumming and singing and getting the crowd moving,” Quiroz states. “It will be electric!” In addition to the bands the event will also feature DJ Seraph. There are two different types of tickets currently available for purchase: General Admission and Premium Ball. Guests with a General Admission ticket will get access to the downstairs area where the bands will perform and where there is a cash bar that will be offering a number of drink specials. Guests who purchase the Premium Ball ticket will gain access to the upstairs open bar which features 3 viewing spaces as well as a giant TV for viewing the performing bands.

For those interested in attending this event, you can purchase tickets and find further details on the fan club’s website.  And while the Vampire Ball is no doubt the most anticipated club event each year, the ARVLFC organizes a number of other opportunities and events throughout the year in addition to the ball. Two additional events of note are a viewing of Interview with a Vampire as well as a tour of the Lafayette Cemetery in New Orleans—the fictional burial ground of the Lestat and the Mayfair Witches and the place where it was written that Lestat hid his jewels.

So if you’re interested in finding out more about the Anne Rice fan club family and you want to attend what will no doubt prove to be one of the most exciting and intriguing events this holiday season, head over to arvlfc.com. The Vampire Ball is less than two weeks away so don’t hesitate!

September 11, 2015
Thanks so much for sharing! Use discount / coupon code SHARE10 at our store for a 10% discount good towards digital subscriptions and back issues.
Send this to a friend