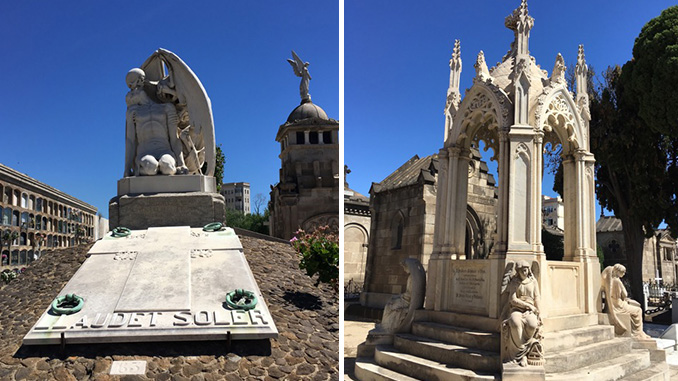 Eventually, we decided to stay somewhere we spoke the language and had a nice trip to London instead. Our second attempt got derailed when I got pregnant and the doctor decided it was too risky for me to fly. Last summer, though, Mason and I were facing a big anniversary. To celebrate, I wanted to take our daughter somewhere we’d never been before. Top of the list was Barcelona.

Of course, I wanted to see a cemetery while we were there. No question which one it would be: I needed to see the Kiss of Death. How better to celebrate?

Mason encourages me to do the thing I most want to do on the first day of our trips, so we got up on Day One in Barcelona and figured out the subway. I’d hoped to buy some bottles of water, in case it got hot in the graveyard, but the market at the station couldn’t break a twenty-euro bill and Mason didn’t want to charge three bottles of water. Given our history with Barcelona, I was waiting for a disaster to strike. I was sure one of us would get heatstroke.

An easy stroll through deserted streets dead-ended at the cemetery wall. It was painted with a timeline mural. Poblenou Cemetery had been founded in 1775, then destroyed by Napoleon’s troops, before being rebuilt and re-consecrated in 1819. We followed the wall around to the cemetery entrance, where we picked up a map that directed us to sculpture and architecture inside. The map didn’t give much information beyond the sculptor and the year the artwork was made — not even the names of the people buried beneath it — but it did point us in the right direction to explore. 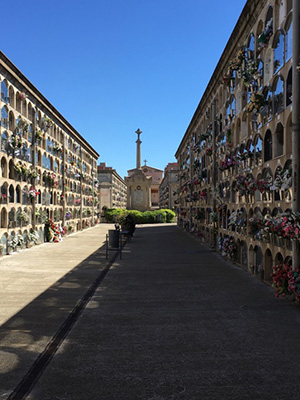 Towering banks of mausoleum niches filled the initial part of the cemetery. Lots of people bustled around, windexing the glass, watering the plants, sprucing things up. I was surprised to see so many people at 11 on a Sunday morning. So many flowers adorned the public mausoleums that the cemetery looked like a garden.

Beyond that lay the historic part of the cemetery. Some of the statues and mausoleums were beautifully maintained. Others ranged from discolored to crumbling. Statues of mourners and angels, gargoyles, busts, columns, obelisks, and cherubs jammed the area. The private mausoleums – called panteons in Barcelona – were all neo-Gothic, dripping with ornamentation. I easily shot a hundred photographs.

For all the people bustling around the new part of the cemetery, we didn’t see many in the historic part. The few who did come back there all seemed to be tourists like us, photographing the monuments.

Every so often a breeze blew off the sea, cool and comfortable. Although there wasn’t much of it at noon, the shade was welcoming. Despite all my worry about the Mediterranean summer heat, the day was lovely. Not a cloud floated overhead. Contrails striped the sky over the water.

The vintage part of the graveyard had a surprising amount of wildlife for a place filled with so much bare stone. Green parrots living in the palm trees flapped overhead, squawking. Pigeons nested on the arms of a crucifix. Swifts zoomed around, catching bugs. A mourning dove called. Seagulls wheeled above us, crying. We watched a little lizard run over a monument, then hide in the shadow of its silk flowers. Later, a mangy orange tomcat scowled at me when I photographed him.

Sorrell is patient with me in graveyards, but a jet-lagged twelve-year-old has her limits. I promised we’d visit the monument I’d come to see, then get on with our vacation.

El Beso de la Muerte stood off in a section of the graveyard on the seaward side. Death grasps a young man’s arm and leans over him to give him a peck on the cheek. I’m not sure it really counts as a kiss, since there aren’t any lips involved. I walked in a full circle around it, admiring the knobs on Death’s vertebrae, the way the skin floated over the dead man’s body. The sculpture was worth waiting 25 years to see.

While I took my final photographs, Mason and Sorrell decided it was time for lunch. I expected we’d go back toward our hotel, but a café across the street offered tapas for Mason and pizza for Sorrell, so we sat outside under the trees.

I realized nothing terrible had happened. Maybe our trip to Barcelona wasn’t cursed after all. Instead, we had a very nice lunch, relaxing as we watched people and their dogs stroll by. Mason ordered pescaditos, which turned out to be little crispy whole fish. With eyes. As he crunched them down, Sorrell got the giggles. She’d settle down, then glance at the plate of fishes again and start laughing all over. She wound us up until we were all giddy. The waitress told us that she liked to see such a tender family.

There’s really nothing like spending your morning looking at grave monuments in a foreign country to highlight the ridiculous brevity of life. I could not have been happier.

A Few Words From Alex Crescioni of Diminished 7

March 22, 2018
Thanks so much for sharing! Use discount / coupon code SHARE10 at our store for a 10% discount good towards digital subscriptions and back issues.
Send this to a friend