Highgate Village stands on a tall hill overlooking London, which sprawls across the river plain below. Highgate’s name summarizes its previous function, when it served as the entry-point for farm goods coming down from the north to feed the metropolis. As we strolled through the former village on this particular summer evening, the neighborhood was full of traffic, but otherwise quiet. The streets grew quieter still as we neared the old cemetery.

The London Cemetery Company opened nondenominational Highgate Cemetery in 1839. Following in the fashion of Paris’s Pere Lachaise and Boston’s Mount Auburn, Highgate was designed as a “garden cemetery” where Londoners could escape the smoke and dirt of their city. The graveyard offered restrained nature beside the wilderness of Hampstead Heath.

Londoners flocked to Highgate Cemetery throughout the 19th century. They strolled its lanes and picnicked beneath its trees, taking pleasure in the statuary and landscaping—and most of all, the view. As the Cemetery Company had hoped, some people liked the place so much that they wanted to stay. At its height, Highgate averaged thirty funerals a day.

Then came the chaos of the 20th century. England sent her young men off to fight World War I, where one of every three soldiers perished. In 1918, the influenza pandemic swept the country, killing hundreds of thousands. One-quarter of the British population died. World War II wiped out most of the next generation of men.

By the 1950s, whole families had died out. No one survived to tend Highgate’s graves; no money came from new burials in family plots. Without income to pay the army of gardeners, Highgate Cemetery was abandoned to nature. A forest of ornamental trees overshadowed the old Victorian cemetery. Wildlife, including foxes, hedgehogs, and rabbits, migrated in from the Heath.

In 1968, the cemetery served as the backdrop for Hammer Studio’s Taste the Blood of Dracula, starring Christopher Lee. Perhaps that led to the outbreak of real-life vampire hunting that mutilated the cemetery in the 1970s. Tombs were broken open and corpses dragged out into the paths. Overwhelmed, the cemetery’s owners simply padlocked the gates and walked away. (I’ve written more about the vampire hunters at cemeterytravel.com/2016/09/20/a-restless-wind-is-blowing-through-highgate)

The Friends of Highgate Cemetery formed to restore the cemetery in 1975. FOHC volunteers cleared brambles, felled invasive trees, and reopened access to gravesites. Eventually, the Friends bought the entire cemetery. They now sell guidebooks and offer tours to fund their work and a limited number of graves are once again for sale.

On the Thursday evening I visited last summer, the Friends were offering a sunset tour of the western side of the graveyard — the original, more fragile side — which is only open with a FOHC guide. My family joined the silent group already waiting in the Anglican chapel. Before the tour began, my daughter helped me pick out some postcards for my collection from the FOHC shop.

Our guide was a Canadian woman who led us out into the old carriage turnaround. During her introduction to the cemetery, the first drops of rain pattered down. I fished the umbrella out of my bag. Thunder rumbled, coming closer.

To tell you the truth, it never occurred to me to drop out of the tour. It wouldn’t be the first time I’d toured a graveyard in a rainstorm. It was simply the first time I’d stood at the highest point in London during a thunderstorm. This is how I will die, I thought: standing under a centuries-old tree in a graveyard during a lightning storm. I decided, with a shrug, there were worse ways to go.

Highgate Cemetery has almost 180,000 burials spread over 37 acres on both sides of Swain’s Lane. Legacy denizens of Highgate Cemetery include Karl Marx, authors Christina Rossetti, George Eliot, Radclyffe Hall, and various balloonists, menagerists, and scientists. Newer burials include Douglas Adams (author of The Hitchhiker’s Guide to the Galaxy), punk impresario Malcolm McLaren (whose monument includes his death mask), and Alexander Litvinenko, a defector from Russia who was assassinated with radioactive poison in a cup of tea in 2006.

Highgate Cemetery in June was amazing. So many shades of green crowded the paths. I struggled to keep up with the tour group while trying to take notes and photographing everything that caught my eye. There was too much to take in. 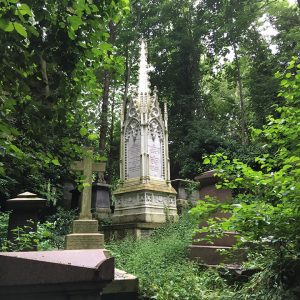 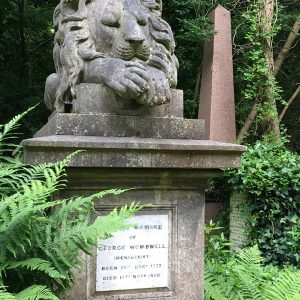 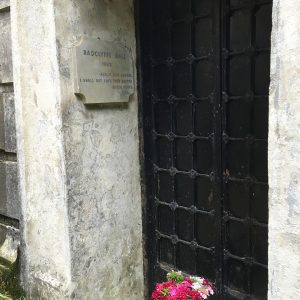 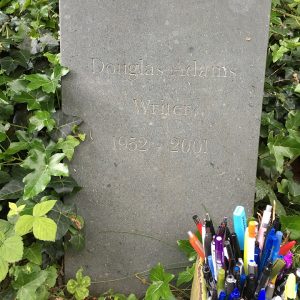 One of the highlights of the tour is the breathtaking Egyptian Avenue. Originally painted red, blue, and yellow, it is still spectacular now that it’s simple gray. An Egyptian arch leads to a sunken avenue open to the sky. Carved into the hillside, family tombs are set apart from each other by columns with lotus bud capitals.

The avenue ends in a ring of catacombs called the Circle of Lebanon. The old cedar in the center survives from the original Ashurst estate, predating the cemetery by at least 150 years.

When I visited in 1995, the tour guide passed Radclyffe Hall’s tomb without remark. I happened to turn at the right moment to read, “And if God choose, I shall but love thee better after Death,” the epitaph chosen by Hall’s surviving girlfriend. This time, our guide stopped to point her grave out and quickly recapped The Well of Loneliness, one of the first novels to address lesbianism openly. Someone had left a vase of flowers, which struck me as especially poignant: only four days earlier, the Pulse nightclub had been attacked. The world has changed so much and has so very far to go.

The tour climbed up to the mausoleum of Julius Beer, the largest privately owned building in the cemetery. Its design was inspired by the tomb of King Mausolus (from whom we draw the word mausoleum) at Halicarnassus, Turkey — one of the Seven Wonders of the Ancient World.

The Beer family migrated to London during the Victorian era. Despite owning the London Observer, Julius Beer was shunned by society for being Jewish. In revenge, he purchased the prime picnicking spot in Highgate and had his mausoleum built to obstruct their view. His wife died first, followed by their consumptive eight-year-old daughter. Inside the mausoleum, a marble angel stoops to kiss a life-sized child — whose face was modeled on the death mask of Beer’s little girl. Beer himself died of apoplexy in his early forties.

After extracting a promise that we wouldn’t take photographs, our guide opened the old public mausoleum for us. Green smeared the skylights overhead, leaving most of the catacombs in deep shadow. Some of the niches were open to reveal the lovely old caskets inside. A drip from the ceiling landed on the back of my daughter’s neck and made her jump.

Back outside in the cemetery, we found the storm had passed us by. The setting sun wormed through the clouds, spilling ruddy light over the white marble monuments. When the tour returned us to the Anglican chapel, my family scampered across the lane to leave a pen at the grave of Douglas Adams. Someone had marked his grave with a 42.

It was a joy to revisit the cemetery angels who first made me fall in love with graveyards 25 years ago. My husband Mason and I visited Highgate Cemetery for the first time in 1991, after a series of missed connections stranded us in London. By luck, I discovered Highgate Cemetery: Victorian Valhalla in the bookstore in Victoria Station. I’d never seen a book of cemetery photographs before, but John Gay’s work was luminous. On the last day of our stay in London, Mason decided he’d rather explore the cemetery than see the Tower of London.

So, on a bitterly cold January day during the first Gulf War, Highgate Cemetery was where our cemetery adventures began. Since then, we’ve visited graveyards from San Francisco to Singapore, Prague to Paris, and all across the USA. These days, we bring our baby Goth daughter Sorrell along.

Gothic Beauty has kindly invited me to share some of our travel tales. In the coming months, I’ll bring you the Kiss of Death from Poblenou Cemetery in Barcelona, a cemetery built beneath an underpass in Paris, Native American mounds in Madison, War of 1812 graves near Niagara Falls, and more. See you next month!

March 16, 2016
Thanks so much for sharing! Use discount / coupon code SHARE10 at our store for a 10% discount good towards digital subscriptions and back issues.
Send this to a friend