Home Music The Unearthly Sound of Bestial Mouths
Share via

Bestial Mouths incorporates goth, industrial and minimal synth-pop. Their third studio album “Heartless” explores the themes of sanity, gender and emotion. The listener is taken on a journey of personal emotional exploration. Lynette Cerezo, formerly a fashion designer, fronts this band. Her talented touch is incorporated in the beautiful style of the music videos, which are a form of pure performance art.

Your music video for “Heartless” has a very distinct psychological element to it. How did you come up with the idea for the video and was there any meaning behind it?
“Heartless” is actually very, very personal for me. Not only is it my favorite song on the album, but it’s also the album title. I was able to work with Niko Sonnberger who has done our previous videos “Earth” and “White Eyes”. In those videos we gave her the songs, she listened to them and the director had a clear view of what she wanted. For “Heartless” when I was writing it, performing it, I had the vision and it was very personal to me. So I met with her and this was the first time we did a collaboration together. I told her what the song meant to me and we came up with the idea together. I was really excited to put the feelings that were involved in the song to visuals. It was actually shot inside my apartment in LA.

Likewise the other videos for the album all have a very distinct look. Which one was your favorite to make and how did you come up with the ideas behind each video?
Bestial Mouths has been lucky because we lived in LA where you meet the most talented directors and videographers. We were lucky to have worked with a lot of amazing directors. Most of the videos were, honestly, their ideas pitched to us. We were like ‘this is amazing, this is what the song means, this is perfect!’. They are all quite different. That is also the other thing I like. Bestial Mouths is more of an art form. Performing is very important. As playing live is very important to me, I wanted to make the videos more like films. Not necessarily like a typical video. When we did “Gulls” that was out at the beach. When we did “Small Prey” we just went out to the desert and got a generator. That was really cool. Doing “Earth” was a physical challenge for me; having to be airbrushed at 4am, on cold days and with crazy eyes and nails. I couldn’t do anything when I had them on. I couldn’t even eat anything. I remember the stylist was throwing nuts into my mouth. Whenever I work with directors, I am like ‘challenge me!’. Maybe my favorite is the one I have just done for “Worn Skin”. It is my directorial debut. Maybe it’s because I have just finished it.

There is a definite theme of sanity versus insanity running through the “Heartless” album. Do you have a central theme you would use to describe the album?
You’re completely right. When “Heartless” was written it was a very difficult period in my life. I feel a lot of that pours over into the album. Even “Worn Skin” happens to deal with being exhausted, worn out and you feel kind of trapped. You are stuck in this position and you are trying to get forward and you don’t. You are going through the motions. It’s a play on life, where you feel sane and insane most of the time. “Heartless” has to deal with being empty and not being able to feel anything. Even in the video it looks like I’m in an insane asylum. But am I really or am I just imagining that? That is dealing with a lot of personal emotions that were going on in my life and a lot of life changes. 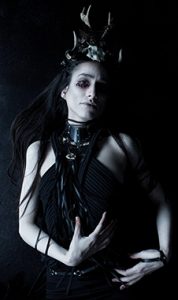 Lynette, you previously worked in fashion design. Do you use your experience to help produce the beautiful costumes and make-up in your videos?
I actually have a BFA in Fashion Design and an AA in Art History. I lived in New York for a while as a design assistant. I had my own line for a while. I worked as a stylist for photos, plays and costume designers. In fact the only time we used a stylist was when we did the “Ceased” video. From the beginning I used to make a lot of my outfits. Sometimes I still do for when I play live. For a recent photoshoot I was able to meet with designers but I styled the whole thing. Sometimes I will have an idea that I want this piece or I will make it for when I play. It definitely creeps into everything.

How do go about writing the distinct lyrics for your songs? Do you start with a general theme to guide you?
It depends, there are a whole bunch of different ways. Lyrics are usually written with the cut-up technique. Sometimes I sit there a just do cut up and different phrases will pop-up. I will realize it forms a theme or there is a different line I like and I just write from that. It becomes a stream of consciousness; maybe what I am feeling or what is going on in my brain will come out. Sometimes the music has already been written and there is the synth melody. A lot of songs have been written in practice when everyone is playing. There have even been times when we get ideas. We learn about something that is crazy and just write a song to fit that theme. Sometimes we want to do a song that is more industrial or harsh and I go about writing lyrics in that way. For each of our songs I try to vary the lyrics and my vocal delivery. I do try to come up with something interesting for each but a lot of our lyrics and songs are poetic in a way. We leave the interpretation to the listener. I like people to connect to it.

“Ceased” has a very clear gender message. Do you feel your music becomes an important vehicle for exploring gender issues?
I really do and “Ceased” was one of the first songs that I really went ahead and expressed that. One thing I usually try to do in my videos, live performances and the music is definitely to show the power and strength of women and what we can do. But also really not focus on the fact that I am a woman doing this. I just show everybody that together women can be strong, we can do this. All of my music tends to have messages of what women have to deal with in society; issues that we have and things that we have to overcome. “Ceased” has a very personal message to me. It deals a lot with society’s stereotypes and what we are supposed to do and kind of the inner turmoil a lot of us go through deciding our own path that we want to take as women. Rejecting that and feeling torn sometimes and lost.

You have a new remix EP is set for release in March to coincide with a U.S. tour. What are you most looking forward to in this tour?
I am actually really excited to do this tour because I recently moved to Berlin and I haven’t been back in the US for a while. I’m really excited we are working with an amazing booker this time. We are going to be playing new cities with new bands and new faces. I’m really excited about the new release we are doing. We have a lot of great artists that are doing remixes including two new Bestial Mouth songs that we are doing and another version of an old song. I heard one of the songs played out in Berlin at one of my friends DJ nights. That was really, really cool to hear it.

What have been the previous highlights of touring in the past?
There are lots of highlights. I guess recently the one that sticks out most is Wave Gotik Treffen. I had always just heard about it and always wanted to go. That turned out to be a really, really amazing experience. Just to see that many people who knew who we were. Meeting other artists there and see all the shows. The city was full of amazingly dressed people. I could have just sat there and people watched forever! There are different experiences when you go on tour. I will never forget on a US tour I was tired, fatigued of driving and going to a little town not expecting anything. We met these people who came up right away and had driven from far away and had gifts for me. I still talk to them this day and still wear the pendant which this girl gave me. I wear it every time I play. It’s my good luck piece.

September 19, 2017
Thanks so much for sharing! Use discount / coupon code SHARE10 at our store for a 10% discount good towards digital subscriptions and back issues.
Send this to a friend