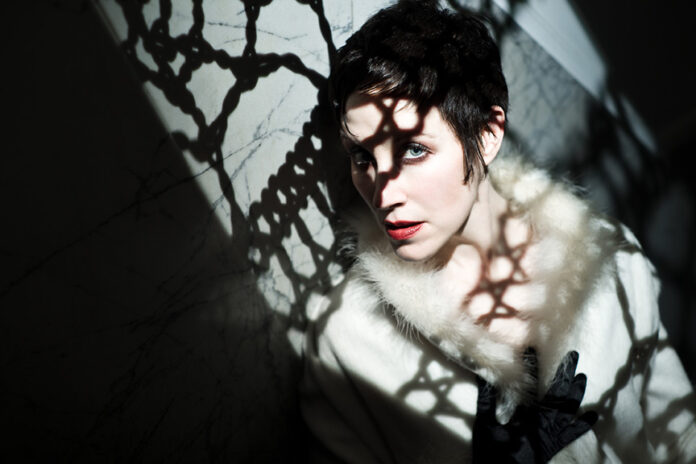 San Francisco chanteuse and multi-dimensional artist Jill Tracy is no stranger to the mystical qualities of life, new and old. This Yuletide season she has not only conjured up a collection of moody and inspired Christmas carols, but has also teamed with the ever-talented Nocturne Alchemy to release a line of amazing scents perfectly matched to the season.

Tell us about your Christmas album, Silver Smoke, Star of Night… What was the genesis of this project, and how did it ultimately come to fruition?
I have deemed Silver Smoke, Star of Night my “accidental album” because it pretty much wished itself into being. I never ever intended to do a Christmas record. Perhaps that’s what makes it so poignant and magical: It manifested itself. Last Christmas Eve a dear friend was going through rehab, so we were trying to find a distraction from the parties and alcohol. A sign posted outside the historical Swedenborgian Church in San Francisco announced a midnight candlelit carol sing-along. We had always wanted to peek inside this magnificent structure anyway, so this would be a perfect opportunity. I had not heard many of these carols in years, and was so transported that I couldn’t get some of them out of my head. I began researching, posting on Twitter of my intrigue. An onslaught of tweets followed begging me to release an album of these songs. While chatting with Sam Rosenthal of Projekt Records, I mused “I’m thinking of an album of my interpretation of dark classical Christmas carols.” He said, “Are you kidding? That would be amazing. I’ll release that in a second!” So the seed was planted. I found myself late at night out by the ocean, recording antique bells, chimes, old toy parts, mallets, metals— playing the piano with tears in my eyes as the moonlight glistened across the keys. I spent evenings through the summer holed up at the piano with bottles of wine, burning frankincense, playing Christmas carols. Truly bizarre and wonderful! This is the holiday album I always wished existed. But I guess it was up to me to make it so.

Some of these pieces date back all the way to the Middle Ages. How did you come across and ultimately choose these?
These are pieces that resonated emotionally, and inspired me musically to make them my own. As with all my work, I begin hearing full finished arrangements in my head, and “O Come O Come Emanuel” revealed itself to me… That song was really the impetus for the entire album. I heard this long slow build, mystical and hypnotic… then transforming into more of an odd jazz groove, but maintaining the sheer formal beauty of the work. I also heard this very different (from the classic version) vocal melody in my head… I was hooked! Some carols I felt best to keep languid, stark, even just solo piano. In fact I was so moved during the performance of these pieces, much of what you hear are complete full first takes. They were magical. I did not want to attempt to lose that visceral element.“What Child Is This?” was the same way, pure emotion. The piano parts were improvised on the spot. What you hear on the CD was actually meant to be a warm-up. But then my engineer/producer John Anaya’s jaw dropped, and we both agreed wholeheartedly, that was the keeper! I did not even play it a second time. “What Child Is This?” is one of the most raw, powerful and proud moments I’ve ever captured to tape.

What—of all the myriad possibilities—do you find most artistically inspiring about this darkest season of the year?
That’s just it, the dark. With the light change, the chill, the barrenness of trees, dismal skies, there is a captivating sense of foreboding, of loneliness— of finality. And if you’re a consummate night owl like I am, you see so very little daylight at all during the season that you can’t help but feel under the beautiful sway of the darkness, the magic of night.

On a more specific note, what do you find most compelling about these carols?
They are fragile and haunting, but poignant and unforgiving. “Coventry Carol” is a lament dating from the 1500s. The carol refers to the Massacre of the Innocents, in which Herod ordered all male infants under the age of two in Bethlehem to be killed. The lyrics represent a mother’s grief for her doomed child. I realized these are not songs to be sung, but tales to be told. Textures and ambiance were a crucial factor for me- the space, the breath, the huge dynamics of the recording added the intensity and cinematic aspect I wanted to create. I even sampled environments, including an abandoned stairwell at night, to create the reverb sound for my piano. I wanted listeners to lose themselves hypnotically within this music, but also honor and embrace the imagery. When you listen to “We Three Kings,” it begins with a veritable score of the Magi traveling far, in the black of night, laden with strange, exotic gifts. In fact, the lyrics for “We Three Kings” was a major factor for doing this album. The little-known verses are eerie and gorgeous. This was a time in history full of violence and desperation, but the songs compel hope and enlightenment. I love the dichotomy. Reminds me of that perfect Friedrich Nietzche quote: “Hope is the worst of evils, for it prolongs the torments of man.”

You have been quite busy with other musical projects this year; what can you tell us about those?
In recent years, I’ve become intrigued with immersing myself in unusual locations, and conjuring music from my reaction to the backstory and the experience within it. I affectionately refer to it as spontaneous musical combustion. I’ve composed music in haunted castles, gardens, decrepit mansions, abandoned asylums— and now I am honored to make history as the first musician to ever be awarded a grant from the Wood Institute, College of Physicians of Philadelphia to compose music inside the famed Mütter Museum, (the nation’s foremost collection of medical oddities) a series of compositions directly inspired by pieces in the collection! I spent part of last winter and spring there doing research and beginning to craft the material. This is a dream come true project. It was vital for me to be in the presence of these long-lost souls as I composed and recorded. I needed to immerse myself in their world. I needed them with me, so that they become an actual part of the work and not just the subject matter. This will be my gift to them. The Mutter Museum project will be my primary focus in 2013.

And, as though music weren’t enough to keep you busy, you have a fragrance line coming out. How did this come about?
I’ve always wanted to create fragrances as a conjuring companion, similar to the way we concoct visuals with each album. A scent is transportive, so much more powerful than we realize. The sense of smell is directly linked to the limbic system, the part of the brain where emotion and memory are centered! And like music, these senses are passive, indirect. Unlike touching a cold piece of steel for instance—everyone would have that same experience—music and scent are completely distinctive and private interpretations. A perfume will even smell quite different on every skin. These scents were first created for me personally. I really like how master perfumer Emerson Hart of Nocturne Alchemy bases his creations on history. He believes scents hold a story told by the skin. I adore incense, especially Frankincense and Myrrh, and wanted Emerson to create simple perfumes for me that had that erotic smoky, powdery element—not sweet or syrupy like typical Frankincense oil—but an experience like that of burning incense, profound, sacred. So it all began as perfume for myself. We experimented with several versions, and I became so addicted to these two fragrances. So many people (even strangers) kept stopping me asking what that amazing smell was… I soon realized they fit perfectly as Silver Smoke, Star of Night. The perfumes existed before the album! And I’m so excited they now exist in the world! Night fragrance for Night music… Silver Smoke is the most glorious frankincense oil I’ve ever encountered, a mix of resins from Egypt and Somalia. Star of Night is a heavier woody blend of Arabic Myrrh, frankincense and Egyptian Black Linen. My musical netherworld set to scent. We’ve created these wonderful limited edition gift sets, glass bottles, autographed, and featuring the artwork of San Francisco’s Trista Musco.

Is there anything else you’d like to tell our readers?
Well, if they’ve gotten this far, I want to thank them for reading my words, and invite them to jilltracy.com for lots more. I adore interacting with my audience, so please also join me on Facebook and Twitter. And wishing you dark enchantments for the season! I hope Silver Smoke, Star of Night becomes a special part of your holiday playlist.

May 4, 2017
Thanks so much for sharing! Use discount / coupon code SHARE10 at our store for a 10% discount good towards digital subscriptions and back issues.
Send this to a friend