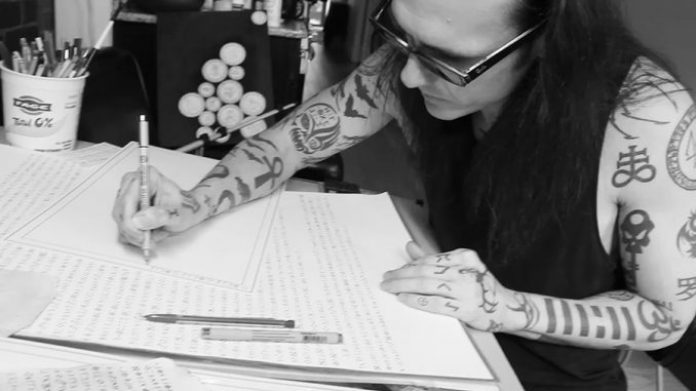 Damien Echols, along with acclaimed surrealist painter David Stoupakis and Gothic illustrator and musician menton3, have united as artist collective The Hand, and are about to debut their first body of original work, Salem, at Copro Gallery in Santa Monica, on Saturday, March 19th. We caught up with Damien (who we also featured in Issue 39) to tell us a little bit about the art show and his inspirations.

Since your release from prison after being wrongfully incarcerated, you’ve been immersed in art from tattooing to having your work in art galleries. What is it about art that you feel really speaks to you and who you’ve become?
For me, art is the side effect of my Magickal practice. The most important thing for me is ALWAYS the Magick, the artwork is just a means of putting it into a tangible form so that I can share it with the world. It doesn’t matter if it’s tattoo work, painting, sculpting, or drawing – it’s still about trying to make the world a more Magickal place.

The “Salem” exhibit will feature two works from Death Row. What can you tell us about what was going through your mind when you created them?
When I would create art in prison, I don’t think I was really even thinking of it as art. I was just thinking of what I was doing as gifts – as ways to show my appreciation for the people who were coming to see me and doing whatever they could do to help me. I couldn’t go out and buy them anything, so I was just doing the best I could to reciprocate the energy they were giving me.

You’ve lived in Salem and now you’re collaborating with two artists to encompass the theme of “Salem.” What is it about Salem that resonates so strongly with you to inspire art?
The concept of Salem appealed to us for several reasons: Nearly everyone has felt like an outcast at some point in their lives, for one reason or another. The victims of the Salem witch trials were the ultimate outcasts. We wanted to honor them, almost as patron saints for those not accepted by mainstream society. Also, Salem was once my home. David also lived near Salem in his youth and visited often. For us modern day Salem felt like a place of acceptance; a place that learned from its past and now embraces the strange – especially practitioners of all different Magickal spiritual traditions. This show is the result of our love affair with Salem.

Why have you decided to turn yourself into a living work of art using symbols of your own design? How will you know when this endeavor is complete? How do these symbols emerge?
I began what I call the flesh book; covering my body in sigils, cypher, and talismans almost as a sort of defense mechanism. When I went to prison, everything was taken from me, including my hair and clothes. They forcibly shaved my head. The only thing they couldn’t take was my skin. So now I tattoo at least a portion of all of my art work on my body so that no matter where the original piece may go in the world, I still maintain a link to it. I guess I’ll know when this work is “finished”, because in some way it will let me know. I’ll just know it.

Tell me about the social awareness campaign “Magick Revolution.” What do you hope to achieve with it? What message do you hope to convey with your art?
The point of the social awareness campaign, Magick Revolution, is to spread information about what exactly Magick is and is not. We want people to understand that Magick is a beautiful, valid spiritual tradition. It allowed me to survive the darkest, harshest place on earth, and I want others to be able to use these techniques to help themselves through their own trying times. I want to help make certain the misinformation which was used to send me to death row is eradicated so that the same thing doesn’t happen to others.

Will there be any other exhibits featured at galleries involving the same collaboration between you and the other two artists? What sort of projects can we expect in the future?
Me, David, and Menton will continue to work together throughout our lives. We have many projects we eventually want to complete, such as designing our own tarot deck. Right now the hardest part is just deciding which to do first.

What projects are coming up next for you personally?
For me, life is about Magick, and about Magick Revolution. So whichever project I decide to tackle next, Magick will continue to be at the heart of it.

June 17, 2016
Thanks so much for sharing! Use discount / coupon code SHARE10 at our store for a 10% discount good towards digital subscriptions and back issues.
Send this to a friend