Home Music An Interview with The Birthday Massacre 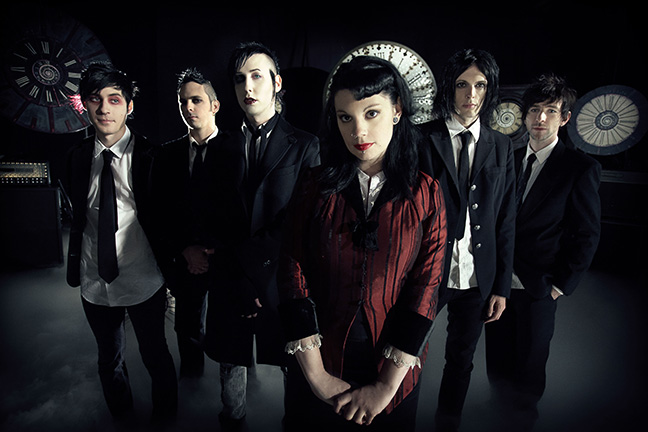 Toronto-based synth-rockers The Birthday Massacre have been making waves in the scene worldwide with their highly energetic performances and unique blend of addictive songs.  Gothic Beauty caught up with Chibi on their fall North American tour to have a chat and get some recommended reading.

So how have things been since you released the new album in September?
Things have been really good; actually a month before we released it we went out on the road, so we’ve basically been on tour since July… We’ve had a couple weeks off here and there, we did the United States, then we did the United Kingdom and it was freezing cold and pouring rain almost every day… And then we came here and we were like, “we’re going south!” because we were doing Florida and Texas – and it was freezing cold, and pouring rain… I feel like I’ve just been in the rain and on a tour bus for the last four months (laughs)…

How much longer do you guys have to go on this leg?
About two weeks, then we’re gonna go home for the rest of the year and just take a break… Which is really good, I’m tired of living out of a knapsack… I go home, and I have all these clothes, and I don’t remember how to wear them, because I have my combination of jeans, t-shirts, the stuff that makes sense…

The stuff that you take when you travel!
Exactly, and then I get home and it’s like (gestures looking through clothes) “I don’t even know how to do this anymore”, I just put on the same stuff so I don’t look terrible.  It’s weird, it takes a period of time to get used to being at home.

When you do go home, what else is involved in the adjustment to stuff like nightlife and so on? I mean, you’re out performing nearly every night for crowds…
I never wanna go to bars, I hate it… When I go home… I don’t even drink alcohol, I don’t do any of that stuff… I don’t even really listen to music, because I like the peace and quiet.   I do like to go to shows sometimes, but it has to be like a special occasion; everytime I go to see a show or go to a bar or something I just feel so stressed out, like there’s things I should be doing, and I can’t really relax in that environment anymore.

So, artistically speaking – as far as the stuff that influences your music – what would you say that you draw a lot of your inspiration from?
Well, we all grew up listening to a really wide range of stuff – a lot of old pop stuff, like, do you remember Roxette?

Oh my, yes (laughs)
Then at the same time we also loved Pantera and Slayer, and you know Nine Inch Nails and stuff so the whole point of when we started writing music was to sort of bring those different influences, those sort of contrasting music styles and put them together into something…

Yeah there’s a lot of fusion in there, there are all these little elements you can pick out like synthpop, or metal…
Yeah totally, and that’s exactly what we were trying to do, because we just listen to such a wide range of stuff I mean, my favorite bands are like Concrete Blonde – and the other band I love just as much is Faith No More… Mike Patton and Johnette Napolitano, I can’t really think of how to reconcile those two together, but… (laughs)

Do you have any favorite authors at the moment?
Oh, yeah! Honestly my biggest hobby is reading, my favorite authors are probably Margaret Atwood, she’s Canadian – you should read The Handmaid’s Tale – and The Edible Woman, Cat’s Eye; all of her stuff is really, really good.  I also like a lot of historical fiction – there’s an author Pauline Gedge, she’s really good, and Frances Gordon – she takes fairy tales but then modernizes the concept, such as the concept of Sleeping Beauty, so she’ll take a girl who’s in a coma for a month – and so it’s a really kind of creepy, modern spin on old fairytales.  Also I really like Richard Laymon; I always feel bad saying him because he’s this like splatter-punk… It’s just the most gruesome stuff you’ll ever read in your life – just horrible and misogynist, like cannibalism – just awful…

Over the top?
Absolutely over the top, it’s just that you can’t stop reading it – I really like him, too.

How much cross-over do you think there is with the musical inspiration of the band and other art forms – the other stuff that you guys are into?
Well when we started the band I was in college taking fine arts, visual arts, and that’s where I met Rainbow; we were both visual artists and that’s still a big thing of mine.   I think we try to bring those elements into the band, whether it was directing off the stage or doing video work, doing even merch designs and stuff like that we’re all very interested in the visual element.  Having a band is a good way to be creative not just musically, but with other different elements.

There are just so many themes that run through your stuff, like the latest music video (In The Dark)… And I’m always curious about the origins of those things, because some people are solely focused on the musical direction, while others…
…and that absolutely is part of it; my favorite thing to do is writing – I like to read, I like to write stories, and so I focus on the lyrical element of the band, the musical element is more Mike and Rainbow – that’s the stuff that they do.  It’s good; you have to be creative, and being able to play technically on an instrument is incredible but you also absolutely have to have creativity, y’know?

Are there any places you guys haven’t been that you’d really like to see?
Oh, yeah! We’ve never been to Japan, which is a place we’d really like to go – the band we’re traveling on the bus with right now, Aural Vampire, they’re from Japan and are telling us all about how amazing it is, and our current bass player has toured Japan and it’s supposed to be just an incredible experience… We’ve been a lot of really cool places; we’ve been to Mexico and Australia and the UK… but yeah, we’ve always wanted to go there (Japan).  We’ve always wanted to go to Siberia too, but I don’t think there’s much of a music market up there…  (laughs) We’ve never been to South America either… But yeah, some areas of the world that are really confusing to get to, like you have to get immunizations before they’ll let you in, or could be dangerous – those could be interesting, too…

So after you go home and take a break when this tour ends, do you have any other plans or projects in the works?
Yeah, we want to do some more video stuff; we toured a lot behind the album before this one (Walking With Strangers) – we toured for that album for about two years, and this time I think we want to sort of be a bit more “ok, let’s take some time and focus on the creative elements, and do some more video work and work on the music some more, and if the right tour comes along then we’ll do it”, instead of just running ourselves ragged – because we definitely did that in 2007 until we took a year off to write the new one. So I think we just want to focus on being more creative and not exhausting ourselves. No burnout!  thebirthdaymassacre.com

August 31, 2014
Thanks so much for sharing! Use discount / coupon code SHARE10 at our store for a 10% discount good towards digital subscriptions and back issues.
Send this to a friend