Corsetry has long been associated with toughness, tightness, and the tantalizing frill of femininity. An ancient garment, sexual, though conservative, the corset has been used for millennia. It was the clothing of select royalty throughout various empires, and has been rumored to be worn by particular pagan Goddesses– a sort of ambrosia of fashion, tasteful and elite.

If the rumors were indeed true, then the Valkyrie would be no stranger to the corset. The mythological hosts of death in battle, these siren-like nymphs were creatures of power, choosing who will be killed in war. Today, these Nordic teases have shifted in look and abilities. They have become everyday Goth dames wrapped in leather and lace, slenderized and sensual, slaughterers of men’s inhibitions, and muses of sexuality. The new ladies lounge around (and go out for a night on the town) in Valkyrie corsets– straight from the heart of Britain.

Geraldine Geoghan, the founder and designer of Valkyrie Corsets, referenced the origin of her creative company’s name to be a wink at her Swedish decent. “I’m half Swedish,” began Geraldine, explaining her motivation. “Although I never lived there, I spent a lot of time there as a child, and my Scandinavian heritage is very important to me,” she continued. “[I] Wanted a name which reflected this.”

The name, however, is not the only Scandinavian interlaced in the company. Ms. Geoghan’s precise attention to detail and flawless, popular designs mirror the focus, delicacy, and innovation of which Sweden is famous for.

Beginning her company in 2006, Valkyrie has also been showcased at several fetish clubs—such as the “Festival of Sins”— and has participated in the Brighton Fashion Week during its first years running. Attributing much of her initial momentum to be “with great support from ‘Fairygothmother’ in London,” Geraldine launched “Valkyrie Corsets” after spending years crafting several for herself and her friends. When her work had caught the attention of the metropolitan store, they had “stocked [her] designs right from the start.” Still customers to this day, Valkyrie Corsets are recognized as popular and tasteful choices. There is one facet of her business however, one rare show of talent, which makes her garments stand out from other companies wear: “bespoken corsets.”

To make a “bespoken” girdle is a tedious yet highly creative– even brilliant– task. Offering a service allowing her clients to design their own intimates, Geraldine, with near mathematical skill, takes a verbal conceptualization of an undergarment and turns it into reality. “Customers will usually come to me with a theme or feel of a corset, sometimes with fabric they have sourced themselves, and we will work out which style of corset is most flattering,” she explained. “Then I will usually come up with ideas for embellishments.” Saying that it was her “favorite part of the job,” Geraldine added, “I love taking peoples ideas and turning them into something beautiful.”

Not all Valkyries invest in “bespoken” works. Many women can’t resist Ms. Goeghan’s advertised designs. “My most popular corset is the black long- line under-bust,” she said. “I guess [because] it is so versatile and has a great shape.” Due to its immense popularity, Geraldine is in the midst of “developing some new black under-bust designs,” expanding the customers options to “have more choice of this wardrobe staple.” Having a potent slimming effect, this particular corset, as well as the “long-line silk over-bust” attire, “give the greatest waist reduction, up to 6 inches.” Though not dependant on the body “shape,” the total thinning effectiveness is relative on a woman’s body type. “Some people just seem to be softer in the middle and can tight-lace with very little effort, and some people are not,” asserted Ms. Goeghan. “It does not seem to depend on how curvy you are, its totally random.” 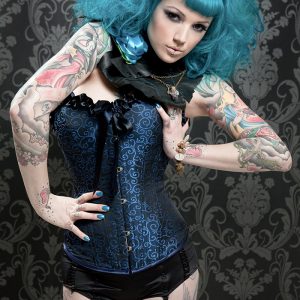 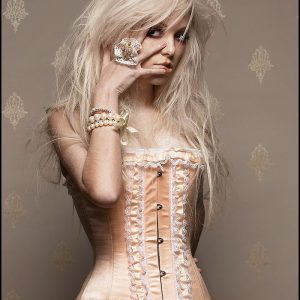 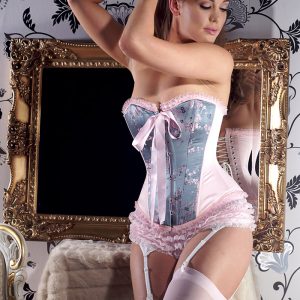 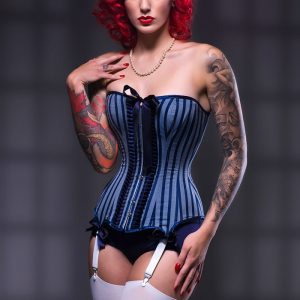 Though often bought for it’s slenderizing and dramatic faculties, corsets are used for many purposes—including medical. “I have made a couple of corsets for people with back problems, as the support corsets given to patients at the hospital are very uncomfortable,” she said. “Using solid steels which stick into the lower back at the bottom, I have had great feedback about how much these corsets I have made have helped people.” Moving on to describe how she makes these particular corsets with very little waist reduction, Geraldine shared her secret: “they just follow the natural body shape of the patients to give maximum comfort and support.”

One of the most towering issues for corset lovers, with or without medical conditions, is comfort. Like stilettos for the abdomen, many women “deal” with the irritation and ache for the chic appeal—a sacrifice often worthwhile. Certain textiles, however, like gelling insoles for those sharp, high heels, tend to have a more assuaging effect. “Natural fabrics such as silk will always be more breathable, especially if the corset is used for waist training and worn for long periods of time,” said Ms. Goeghan. The outer layer, however, is only one of three, covering up herringbone coutil, boning and a soft, cotton inside.

Discussing how her corsets are crafted, Ms. Goeghan revealed some of the materials she uses that make her corsets exclusive. “My corsets are made from a combination of sprung steel bones and spiral steel bones,” she begins, “the spiral steels flex sideways so are used where the seams are not straight, often over the bust-line. The sprung steels are used to give solid structure to the corsets.” Despite this seemingly irksome task, Ms. Goeghan says, “the most challenging part is often sourcing the fabrics.” Delving into more detail, Geraldine writes further: “My head is always full of ideas, but finding the perfect fabrics for a project can be really difficult. It often takes as long as actually creating a new design. I am very envious of huge companies who can get there own fabrics printed, I would love the opportunity to do this but the fabric runs are far too big for a bespoke company like mine. I would say the simplest part is the actual construction of the corsets, after so many years and hundreds of corsets this is the part I can do on autopilot.”

Her professionalism and crafting abilities—being able to go on “autopilot” while making a corset—has been her ammunition allowing her to fly high. Collaborating with designer Joy Williams, Ms. Goeghan is planning to work with her colleague in designing a latex line of corsetry. “Joy makes the most beautiful liquid latex embossing which I think would work beautifully with my corset designs. We are then hoping to put on a show together at torture garden, something I have not yet done but have aspired to for a long time.” Also aiming to take part in the London Fashion week as well as planning several new photo shoots in the near future, Geraldine is keeping busy, and her “Valkyries” are gaining exposure– one sexy little number, lounging in her dimly lit home, at a time.  valkyriecorsets.net

October 30, 2015
Thanks so much for sharing! Use discount / coupon code SHARE10 at our store for a 10% discount good towards digital subscriptions and back issues.
Send this to a friend