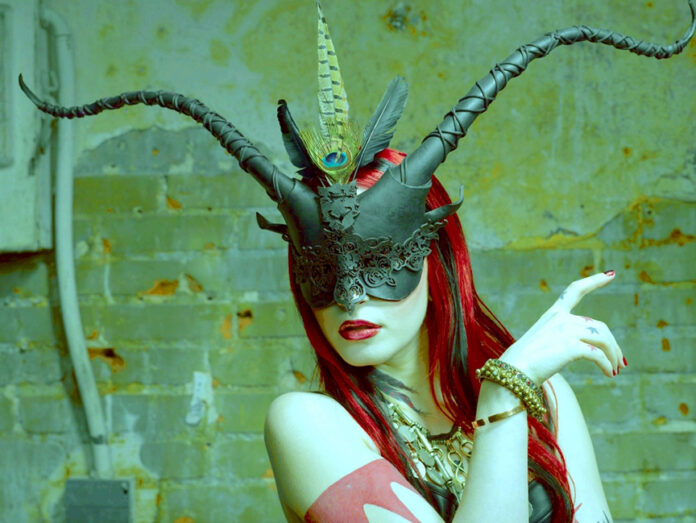 The human mind is hardwired to see faces in everything. We see eyes and noses where there are none: in bark, clouds, and fallen snow. Perhaps this is why Vincent Cantillon’s masks are so striking. A face can shift from being the object of our obsessions to a vehicle for lavish personal adornment.

Working from Denver, Colorado, Vincent began making Halloween masks out of latex for a costume company in the early years of the millennium. After designing zombie and monster faces for a living, he was introduced to leather mask-making by a friend around 2006, and it was love at first sight. “I liked the way the leather could be shaped into forms that weren’t possible with latex masks,” Vincent says, and has gone forward with no regrets.

Looking over his collection, familiar gothic accoutrements abound. Black leather, folded, cut, and pierced with accents of gears, coins, feathers, and paint mix with flares of deep reds, rich greens, and spectral white. The Jawbone Headdress is built using an entire deer’s jawbone as a frame and includes other unusual elements like a pair of turkey feet which vignette a snipped-down, eye-like peacock feather. Not surprisingly, it adds about a foot of height to the wearer. The only way to describe it is tribal-gothic.

I like to think of my style as tribal-gothic, which fit together well because of their indulgence in personal adornment, like piercings and tattoos, and the wearing of bones, feathers and metal pieces.

Many such elements are mainstays in gothic culture, albeit generally spread out over the body and not concentrated so intensely around the face. Very few goths exist that have not yet been seduced by something skeletal. Skulls and other bones, or anatomically correct hearts and organs seduce us easily, and fit so well into an outfit or home décor. Really, it is a natural progression to find a way to fit a real skull to highlight one’s own skull, or to find a creative way to pack more metal onto one’s body. As a species, we have been doing it across hundreds of unrelated cultures since the ancient times. When asked about the correlation between goth culture and ancient tribes, Vincent becomes passionate. “This tradition of body art is being kept alive by people like punk rockers and goths, they make it part of their lifestyle and wear it proudly even though it goes against mainstream society, but we need to keep pushing it until the ‘freaks’ are the mainstream.” Words to remember. 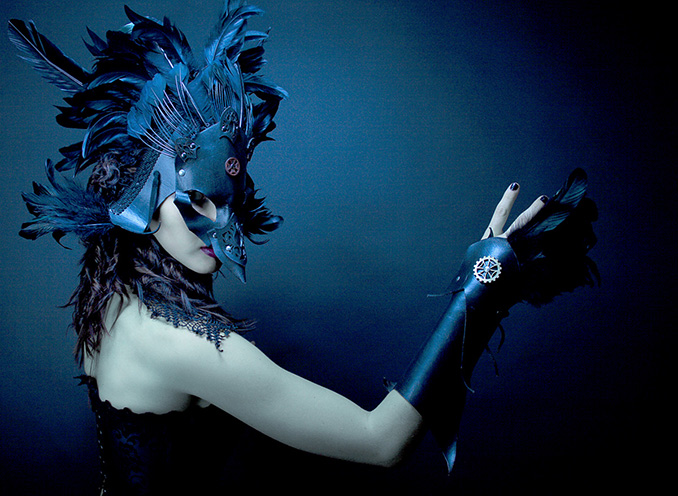 As followers of the tribal movement know well, music and dance is a major part of not only cultural unity, but social bonding and individual happiness. Goths know this equally well; there’s a reason why we converge at the night club to move to the music we love, and it has less to do with getting intoxicated and more to do with performing a cultural rite. This is principally where Vincent goes for new inspiration. Through trips to the library, and more specifically, the history section, records of African, Native American, Mayan, and even Aztec ceremonial designs become sketches for modern adornment.

“After looking through books and watching films I will pull out the sketchbook and do several concept drawings, then I will put those aside and work in a spontaneous way, creating as I go along.” The creative force is instantly visible. The Black Wing, with its curling accents resembling wings in the place of ears, is attached to a mask which simultaneously becomes a skull overtop of a face, instead of the other way around. It is something one could imagine an ancient priest wearing to a funerary ceremony.

For the moment, however, Vincent is working on incorporating an entirely feminine presence into his work. Despite the creepy, even violent aspects of his masks, there is something undeniably womanly about it. “The underlying theme to my work is a combination of elements that are seductive, yet deadly or threatening in some way. I like to think that it confuses the subliminal response, like a mental tug of war… I also like to use flowing lines and curves that work well together, but I like to add more to it than just ‘sexy’… some of my ideas come from women of legends that have some kind of inner strength or supernatural ability… women that men respected and feared.” Such threat and femininity is patently visible in the Steampunk Crow Mask, which is built downward in a long beak instead of upward like the Jawbone Mask. The seductive curl of the bill appears delicate, and it also puts a lot of emphasis on the eyes of the wearer. However it is undeniable that the vast alterations to a woman’s basic facial structure give it a certain amount of shock. Yet another, the Victorian Raven Headdress is adorned with wispy black feathers attached to silver stalks and ornate leather piercings, but retains an unusual amount of breadth to offset its fragility. The round headpiece calls to mind the crown of a queen.

In general, Vincent Cantillon is experimenting with the Internet and social media to help his creations see the light of day. He has several profiles on various art-based sites with several stunning photographs of his masterpieces, but very little written about himself. The two main sites that his work is best available through are Etsy and Facebook, which he operates under his full name. Both sites show evidence of careful attention, but he is infinitely more likely to update either page with a new photograph of his artwork than anything personal, even a photograph of himself. He favors Facebook as the best website to get a feel for his work over Etsy, probably because it can support many photographs of a single work in order to showcase its aesthetic presence within a tribal context and not just clinical images that show only selling features.

At the moment, I am excited to say that I now have one in my hands to describe for you in terms of its wearability. The inside is lined with soft suede, and the outside sparks with almost imperceptible accents of warm pink at strategic parts that are not easily visible in the photographs. If you are questioning the fit of the masks, I can attest that it is somehow roomy; the basic features of the eyes and nose bridge are here, but it has not been molded to fit a specific person’s face. How tightly you want it to cling to the sides of the face is up to you. The fit depends on how closely you fasten it, and it is tied with strong, soft leather ribbons, and not elastic. One can really wear this with anything, like the ornate tribal looks present in much of Vincent’s photography, your favorite dressy corset, or even a suit! I will warn you however, that such a thing is best worn by a person who is not afraid of attention, but paradoxically someone who may benefit by the confidence that comes with a hidden face.  etsy.com/shop/VincentCantillon

An Interview With Neil Gaiman

December 1, 2004
Thanks so much for sharing! Use discount / coupon code SHARE10 at our store for a 10% discount good towards digital subscriptions and back issues.
Send this to a friend