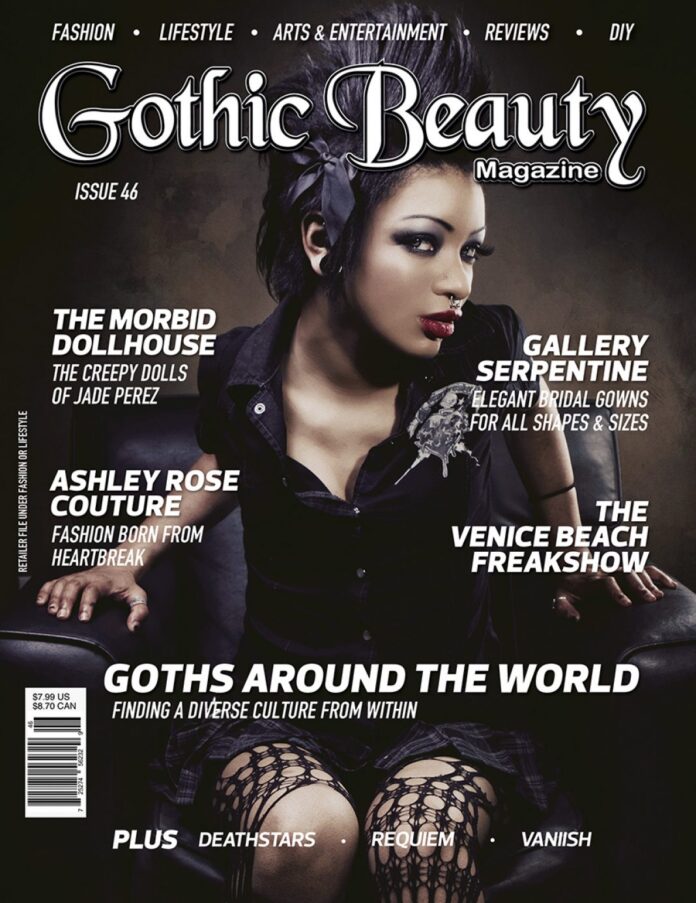 We’re excited to announce the world-wide release of Issue 46!  Here are a few features in this issue you won’t want to miss…

[h1]Ashley Rose Couture[/h1]On most occasions the gothic cliché of being depressed and lonely is exactly that, a cliché. It does not come with the package, along big boots and a Tim Burton box set. For one designer however, it was this cliché that provided the push for her to pick up needle and thread.

[h1]The Morbid Dollhouse[/h1]For Canadian-based artist Jade Perez her love for horror and Halloween has inspired a uniquely terrifying take on classic doll making through her company The Morbid Dollhouse. Perez’s creative vision is not for those easily prone to nightmares.

[h1]Goths Around the World[/h1]For part one of a new series on different types of goths around the world, we interviewed three black American goth readers about their experiences in the community.

[h1]Deathstars[/h1]Already well established all over the world, Sweden’s Deathstars are a much loved presence on the European gothic scene who’ve yet to get the chance to show American audiences what they’re all about.

Grab Issue 46 at Barnes & Noble, Hastings, Chapters (Canada), Book World, Sheltam Books and Copperfield’s Books- or grab Issue 46 from one of the independent retailers that stock our mag. Subscribe or order this issue from us directly.

July 31, 2015
Thanks so much for sharing! Use discount / coupon code SHARE10 at our store for a 10% discount good towards digital subscriptions and back issues.
Send this to a friend