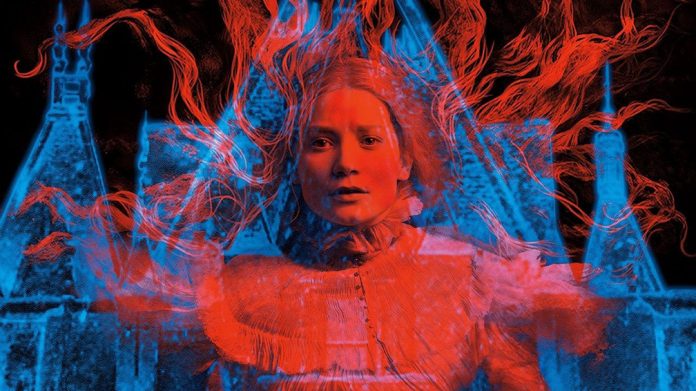 Don’t go in expecting a horror film by the strictest definition. Instead, del Toro delivers a true Gothic romance, full of decaying mansions, ghosts, and love gone terribly, tragically wrong. Beneath the surface of the film’s straight-forward narrative are layers of nuance to the roles the characters play, the story structure which mirrors itself, and multiple homages to the history of horror in film and literature alike. It’s a dark fairy tale told through the language of Gothic horror.

Reunited with Tom Hiddleston from their appearances in the chic Only Lovers Left Alive, Mia Wasikowska takes center stage as a practical, intelligent writer in glasses, harboring ambitions beyond marriage and the usual concerns someone of her station in the American moneyed classes is supposed to prioritize. Her character does want romance and passion, but she refuses to acknowledge any possible subconscious yearnings until she meets Hiddleston’s dashing Sir Thomas Sharpe, impoverished baronet, who woos her in the best manner possible – by admiring her creative work. For all her shrewd acumen, Edith is completely unprepared to handle the vicious sophistication her lover’s sister Lucille Sharpe wields with deadly force. Jessica Chastain completely transforms into a dark Rapunzel who wishes to confine herself to the towers of Allderale Hall by any means necessary. Charlie Hunnam rounds out the cast as Dr. Alan McMichael, an admirer of Edith’s, with brains and steel lurking just beneath his amiable demeanor. All play their parts with conviction, but it’s Chastain who steals the show with her character’s force of will. It’s hard for her character to actually evoke sympathy, but it’s impossible to deny how compelling her story becomes through her portrayal alone.

The canon of Gothic literature is dominated with women writers and characters, from Ann Radcliffe to Daphne du Maurier, and Crimson Peak owes its influences as much to those works as it does to the colors of the Hammer films and the shadows of the Universal monsters permeating the set design. Guillermo del Toro gleefully deploys the tropes of Gothic romances as his naïve heiress is whisked away to a deserted, decaying ancestral manse on the moor by her mysterious Bluebeard, much to the disappointment of her long-suffering, ardent admirer. Sharpe needs Edith’s money to revive the family clay mines; his sister is mysteriously hostile even as she keeps the family’s dark secrets alive. However, although the plot is fairly straight-forward, the nuances to the characters elevate the execution. The naïve heroine has more brains and spine than the Sharpes expected. Dr. McMichaels is no fool either, despite his easy-going nature, and Lucille Sharpe does have a heart even though it’s grossly deformed. Hiddleston’s Thomas Sharpe is the one character who might suffer from the subversion of these archetypes. For those expecting the dangerous charm Hiddleston usually exhibits, he’s more low-key than Loki, neither a complete cad nor a paragon of virtuous masculinity. In lesser hands, the character would just be window dressing and dismissed as weak by the end of the movie, but Hiddleston’s skills rise to the challenge, making his character more tragic than pathetic. Plus, the audience is blessed with a shot of his glorious butt, so overall, it’s hard to find much fault with his portrayal.

True horror fans will the scares predictable, so they should be judged more for their execution than for their originality. It’s not so much “when” or “if” as it is “how.” A ghost casually strolling by in the background of one shot telegraphs its presence well in advance, meaning the tension becomes wrapped up in the anticipation more than the sudden jump. Crimson Peak’s design and camera work are full of homages to the whole history of horror film with the touches of Caligari, of The Ring, and the use of close-circle fade-outs and transitions from silent films. When Edith floats through the ruined manor in her voluminous nightdress, with her impossibly huge golden curls billowing around her face, and carrying an ornate candelabra, she may as well have stepped right off the cover from an issue of House of Secrets. And this house is full of secrets for sure.

Crimson Peak’s simple story may disappoint del Toro’s fans hoping for something more unique. But the story structure holding up this direct narrative is very satisfyingly complex for those who enjoy such analysis. Starting at the end, the viewers are then taken back to the beginning of everything for Edith, when she’s subjected to a terrifying prophecy from her loving mother. From that point on, the movie keeps mirroring itself front to back, in the meta moments when Edith discusses her writing with a skeptical audience, in the attacks on her art both the Sharpes hurl at her, and in the ominous definitions of love the characters voice. “It is a monstrous love. And it makes monsters of us all.” Edith will end up having to face what her love drew up out of her unconscious depths. Is this circular structure a warning to her future self? At the end, she really has become more Mary Shelley than Jane Austen, just as she said she preferred.

Crimson Peak may not have the inventiveness or emotional depth of Pan’s Labyrinth, but it’s a glorious feast for the eyes, and a satisfying Gothic tale well told. It’s a fully realized world, dripping with atmosphere and rounded out with strong actors, committing completely to their roles. Fans of Gothic mystery and romance should consider it essential viewing. And for those few remaining skeptics, there’s always the inarguable trump card – Tom Hiddleston’s ass.

Crimson Peak opens in theaters nationwide on October 16th. Don’t be lame and miss it.

Tarot: Witch of the Black Rose #108 by Jim Balent

A Murder of Crows Descends Upon Gotham for a Full Weekend...

Tarot: Witch of the Black Rose #108 by Jim Balent

February 28, 2018
Thanks so much for sharing! Use discount / coupon code SHARE10 at our store for a 10% discount good towards digital subscriptions and back issues.
Send this to a friend